P2=F2, Chock Full of Stuff, and Another New Profession

Hey, guys! P2=F2 means Party x 2= Fun x 2. Well what does that mean, Hero? It means a double Party! Mark Stormhunter of the Elementalists said he had 30 followers. I noticed my blog has 30, too! Well, now 33, but I had 30 followers at the time when I read the post when he said posted that. I posted a comment saying that I had the same amount of followers as him. He replied that we would have to meet up ASAP to discuss the date, etc. We were fortnuately that we were both on. We discussed and came out with this:

Arrive 15 minutes early for the party! The party will take place at Mark's Sultan's Palace. A scavenger will be embarked! We hope to see you there! 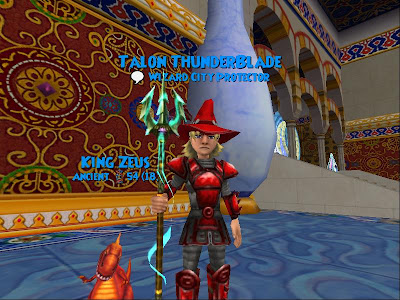 Besides that, I have lots of things to go over! The pink, er, I mean Black Panther mount is available to everyone with the putting the code "panther" to your wizard account. Sadly, it is only a rental, resulting only 15 days for you to ride the awesomeness of the panther. Luckily, I was to lazy to put in the code, so now I will wait till no one has the panther then we roam the commons! Except Nicholas Lionrider and Blaze Shadowhorn, they'll be roaming with me, too. XD

Speaking of Blaze and Nick, they aired they're first Spiral Live episode! Good job, guys! Justin Shadowblade, Deathywiz, was interviewed on their first show. There were lots of um, so, uh, and ya's. But other then that, fantastic. I know most of you guys already know this, but, um, there's a new pet: Samoorai!
I bought it. Head over to Friendly for the benefits of the cow with life giving skills. Thomas loves the people at Petnome.

Nicholas Lionrider had this random party at his Zoo/Royal Playhouse. Lots of people attended. Obviously, this was an unplanned party. Nick was urging me to draw him, so I did, but there were so many distractions! Nick, if you're reading this, I'm still drawing you. It takes time... I got to add a couple wizards: Deathywiz Justin Shadowblade, My2Cents Chase Willowweaver, and The Potions Cabinet Travis Titanthief. 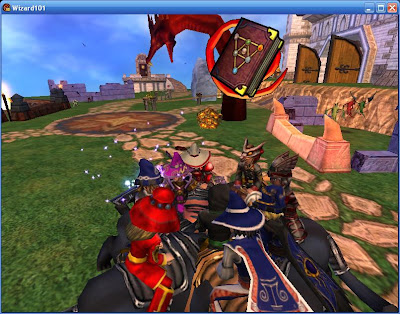 Let's see: Amber Rosepetal, Edward Lifegem, Elijah Stormheart, Me, Nick, Justin Shadowblade, Travis Titanthief, Chase Willowweaver, and Malorn Ghostrider. Malorn doesn't have a mount for some reason... I was the only one with a tiger, Nick was the only one with a lion, and Chase was the only one with a lioness. If Nick is King of Lion, does that make me Emperor of Tigers? Think so. Amber, for some reason, your blog isn't found, so I can't link it. Sorry.
New houses! Yay! There is the Sunken Palace and the Wizard's Watchtower. I will get both of them once they come out in Live Realm. I am ready for it because I have max gold and 500/100 in my bank. Can't wait! I will buy the houses and then breeze through Wysteria and get the badge A+ Student. Victoria Spiritblossom and I are dying for the Live Realm Wysteria!
--------------------------------------
Ok, now for the new profession. I already have drawing. This one is Expedition Discovery! It's where me and my friends venture beyond the spiral and crack the awespiring mysteries of the unkown wonders, like this: 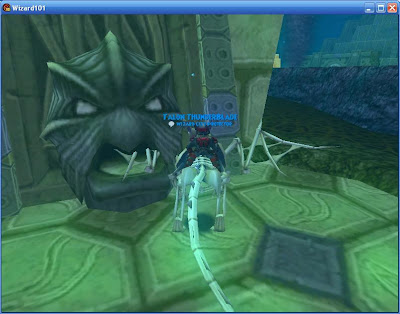 Location: Stormriven Hall, Celestia
Kraken Face! This kraken looks like half gorgon and half basilisk, where it will turn you to stone at the mere glance then banish you from existence. Just kidding, guys. Why is this kraken face carved/studded here on the walls of Stormriven hall? Were the Krakens worshiped here? Maybe the Krakens were worshiped, but then later betrayed by the Celestians. Was it a symbol of the dwellers of Stormriven Hall? Oh, the wonders! 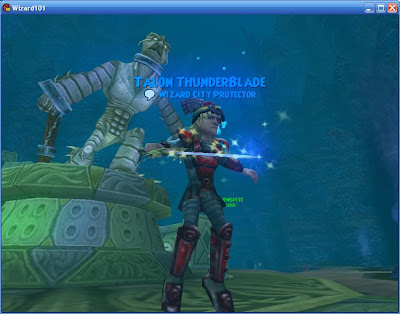 RELEASE THE KRAKEN!!! It's so fun to say that. Why is the Kraken chained onto a pedestal? Yes, I know it's just a statue, but it might resemble why it maybe an object to symbolize the justice or freedom of the krakens/Celestians. 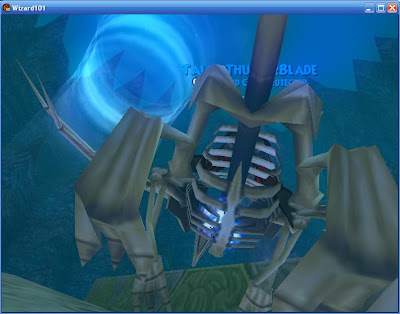 Last picture, readers. Ooooh, the exit and entrance. It looks like a right-side up vortex to me. It ascends and descends up and down. From Stormriven to Stormriven Hall and back up to Stormriven. Just don't forget to bring your goggles and swimwear, you'll need them. Expeditions will include pictures, thougts, humor, and some pondering. Don't forget the party information. Also, my blog name is changed to The Heroic Pyromancer: Hero's Collection of Adventures. I felt like it need more...awesomeness. XD The URL is still http://www.theheroicpyromancer.blogspot.com/ though. I hope you enjoyed this fun-filled post of excitement.
Shelby Rose: Mr.Sunshine said hello to Elemental Hero The Shining.
See you in the Spiral!-Thunderblade
Inscribed by Talon Thunderblade at 12:57 PM