Hi, there, spiralites! Remember when I posted "History of My Wizard Life"? With the two music videos? I decided to make a better version of them because I recorded those on a phone, and it sounded like it was over with an electric guitar and really bad quality. I mean seriously, I admit it was bad. These have much better quality and will not sound like it was autotuned with an electric guitar. These videos took forever just to upload them.


Dynamite by Taio Cruz
Hot N Cold by Katy Perry
I know that you already heard them before, so I added another one. This one is not as popular. It is called "I am the Doctor". Doctor Who fans will know this obviously.


I am the Doctor
I hope you enjoy those videos. I own these videos just in case you didn't know. Besides that, I got really bored on w101 while waiting for these to upload. Mark Stormhunter, The Elementalists, was on, and I ported to him. We chatted about stuff. Mark watched either my bone dragon devour a bear NPC in Grizzleheim or the bear gobbling my bone dragon. It could have been either one. Still talking, conversations were gradually dying.
I said, "Hey, why don't we count up all the blogger friends we had total!" Mark agreed, and we counted. I had to recount mine so many times! Turns out that we both had the same amount of blogger friends: 29. We were astonished by the number of blogging friends we had. Then I said which bloggers did we have or not. I went first. The pattern was pretty funny: yes, no, yes, yes, no and so on. It was his turn. He said some that I knew there name, but I didn't know which blog they ran. This always happens! I meet a blogger, I know their name, but I am clueless which blog they run.
Right after that conversation, Brahm Deathwraith,  Blaze Shadowhorn's alt, told us to port to him. The "go to location" was Colossus Blvd. Why there? Briskbreeze, of course! I have beaten this instance once. This this is the second time. Mark, Brahm, Ryan Strongheart, and I participated  in this. I messed up on the sigil couple times...Well, we obviously annihilated the foes that resided there. Although, Mark and I forgot the bosses' cheats. So we just improvised. At the end, I took today's Heroic Picture of the Day. 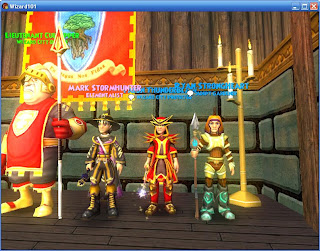 Heroic Picture of the Day: Mark Stormhunter, Talon Thunderblade, Ryan Strongheart, and Brahm Deathwraith. (Brahm not shown.) In the end, I found at that Malorn Ghostrider was on wiz. Ryan left, so Mark and I wondered what Malorn was doing. Here's what he was doing: 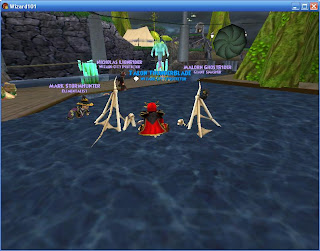 Yeppers, this in the Storm house. Very hard to describe where this actually took place in the Storm House.
But good job, Malorn! Can't wait what pull off next! From this point, lots of wizards logged on. Malorn decided to have an unplanned party, and said, "Invite all your friends!" So we did. We were trying to call them, but they randomly logged off, for no reason whatsoever. Sean Dragonflame from Balanced Blizzard came though. We added each other. Colin did, too. Lastly, I lost connection...again. That's all for today.
Shelby Rose: Phone cases are delusional with their posh hoodies on them.
See you in the Spiral!-Thunderblade
Inscribed by Talon Thunderblade at 10:53 PM