What the heckhound does today's post title mean? I mean, those are just several words that may represent everything or nothing. I will tell you...in this review of Kestrel Shadowthistle's awesome End of Summer party! Kestrel, if you are reading this, I want to say that party was a fantastic experience for all who attended your party (except for that Alex Fireheart)! As I logged onto W101. Victoria Spiritblossom, Smart Allec Wizard, asked if I was going to Shadowthistle's party. "Yeppers," I said without doubt. The loading page had better turn its' page because Victoria already sent me a message lol, "Port to the party!" It was around 8:52 pm at this time.We were at the life house of Kestrel Shadowthistle. Of course, I saw her. I asked her if she would except my friend request. She didn't deny the request and added me! Thank you, Kestrel. Out of the blue, and I mean literally, Kevin Battleblood ported to Kestrel. I now have met KBB three times in my wizarding life. The party was just starting to begin, barely.

Soon, lots of wizards popped from lots of wizards. Let's see how many I can name from the top of my head that were my friends that attended the party lol: Amber Rosepetal, Nicholas Lionrider, Diana Wildheart, Talon Nightshade, Elijah Stormheart, Elijah Lightthief, Kelsey Fireheart, Victoria Spiritblossom, Timothy Lighttalon, and Arlen Dawneyes. I hope I didn't miss anyone. :( Sorry if I did. Kestrel's costume theme was be who you are not. I am not Friendly Necromancer, so I was him for the party lol-fire style! So was Amber and Nick! 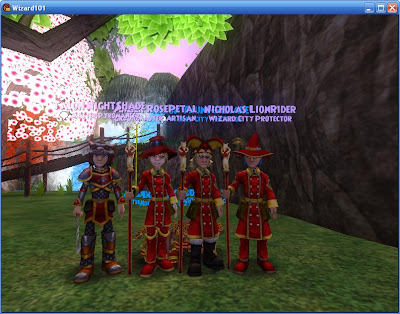 Yay! Fire power! Helephant Rage! Talon N. decided to raid this by being a dragon warrior. (Jk, Talon.)
I guess this will be Heroic Picture of the Day. Yup.
So once everyone was all hyped for the party. We took a lot of pictures lol. It was quite hard to get everyone to stand in position and say some things. 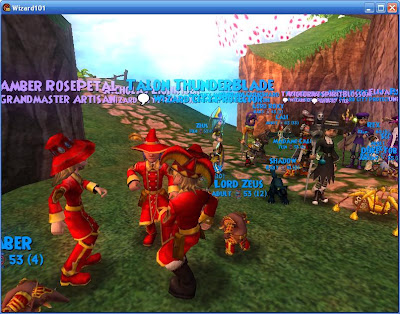 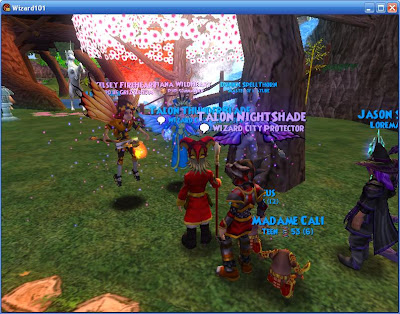 I actually saw all three fairy wings together. Orange was Kelsey, blue was Diana, and purple was Donna Spellthorn. Yes, Donna is a bunny with purple wings. 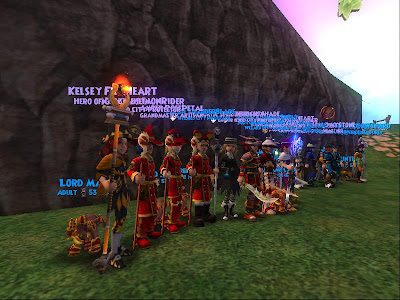 So this is the long line wizards who attended. I am sure some weren't included in the picture. Some were still coming, too. 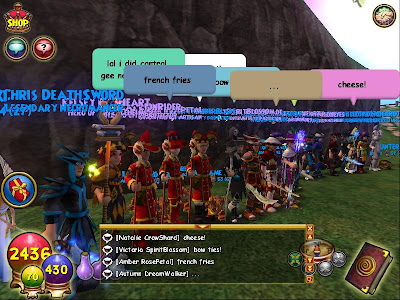 I think Talon Nightshade suggested we say our favorite foods on a count of three. One, two, three! Mango, sushi, pizza, mac n cheese, swordfish, ice cream, chocolate, pie, salad, and bread pudding! So here comes the why the post title is like that. Someone hollered, "Squijax!" I was like what? What the heck is squijax? 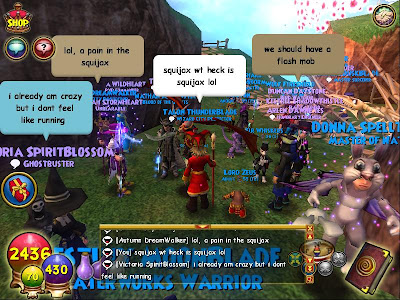 lol, a pain in the squijax
This eventually got into some other words which include ataraxia, tacoxi, wumpus, stoprmzilla, and omnijak. No one has any idea what those words mean. Although, I did hear someone say that wumpus is a creature you fight for Cyrus... I guess KI added these randoms word so we can holler them out at random people in the commons! Squijax sounds like a squid. In the process of the random word hollering, Victoria finally learned that you can say "yeppers" in W101. Yeppers, Victoria. 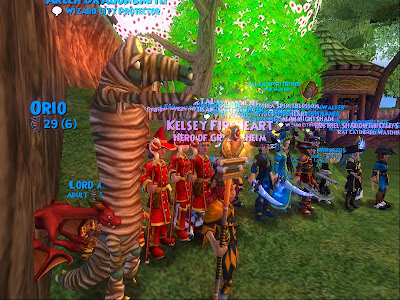 Here's another group picture. I got to add twizard Patrick Hawtamer and Duncan Daystone of Wizard Philosophy 101.  I don't why that link is underlined. 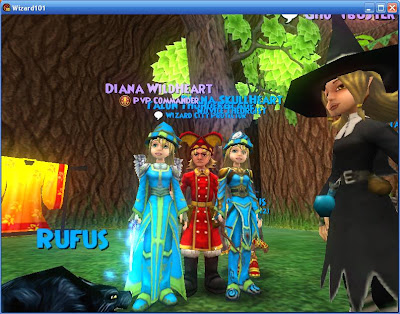 Yeah, the two Diana's returned. Victoria is looking at...I don't what she's look at actually. But Rufus is glaring at you, the reader, ready to devour you and feed on your fleshy flesh. Just kidding, guys. Rufus is nice doggy. Kestrel then announced some hide and seeks. They were quite fun. I won the "Find Elijah Stormheart." He was in the tree entrance/Bartleby spiral gate house glitch. We had a great time. Until a guy named Alex Fireheart appeared. He was bothering Victoria, and then he false reported on me and Elijah Lightthief. He also swore once. I told him to watch his language. At least I think he reported us. He denied it. I was quite shocked. I mean who would report Elijah and me. Unless, that person accidently pressed the report button. Kestrel lost connection at this scene and couldn't see a thing. From this point, I become the detective Hercule Poirot! Don't know him? He's the famous detective in the world renowned author of Agatha Christie! It was similar to a crime scene. Alex denied he reported us. Who else would false report us?? I started asking people what were you doing at that time at the scene? What did you see and think happened? Eventually, Kestrel got back on, and I immediately told this to her. It was named: The Case of the Mysteriosus False Reporter. But Alex hid, ran, and went to the house making it a wild goose chase. Kestrel finally found him, and Alex was booted off, but I lost connection right after that. It ended there.
﻿Well, we all hate it when a party pooper ruins the party like that. At least we had a great time. Thanks, Kestrel! The party was amazingly fun. Please host another awesome party another time! Also, this is my 30th post, and I have 30 followers! Thanks you guys! I appreciate it.

Shelby Rose:﻿ Professor Frothingslosh was conducting an experiment with a playtpus and some squijax pies.

See you in the Spiral!-Thunderblade
﻿
Inscribed by Talon Thunderblade at 12:48 AM