PvP and Friend Meet Up

Couple days ago, I met up with Mark Stormhunter and Sierra Moondust, two of my best friends on W101.
I was talking to them while I was at the Pet Pavilion, while they were doing other things. So Mark and Sierra decded to teleport to me. Suddenly, Pet Pavilion was filled with so many wizards. I have never seen that many wizards at Pet Pavilion before! Because of that, I decided to talk with my friends at my house ( my MFP).

After talking, Mark wanted to PvP. "Whoever wins, gets to battle me," Mark boomed. I was like what! With who? "Oh Sierra, of course!" I said. I defeated Sierra. I don't know how, but I did. She didn't play out elemental defuse, elemental shields, weaknesses, and I was like wow! So I got to battle Mark! Side Note: We are all Legendary wizards. Before my battle started, Sierra said she almost always good at PvP. I said that I was usually horrible at it. Oh, well. Mark kept buffing and buffing, and I was panicking and panicking. With a heavily buffed Leviathan he...didn't kill me, only half of my health was gone because I blocked his critical and I resisted about 30% of it. My turn! I Heckhounded him and he almost died. Mark's turn, I think he Pixied himself, but the Heckhound was too strong for him to handle! Then I took a pic. 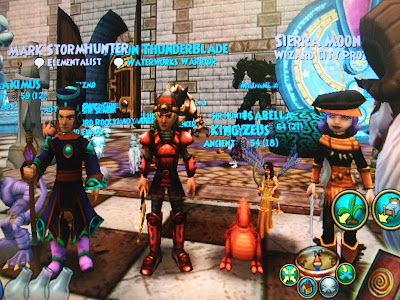 My house after PvP.
Then we went to Mark's Luxury Airship house. I didn't get a pic because you will have to see it for yourself!
Do you know why? Mark's Party! (http://www.elementalists.blogspot.com/ for more info)
Today, 6:00 pm CT, Storm Tower, Pixie Realm Area 1-BE THERE! 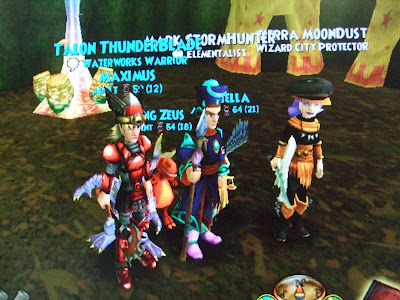 After the Airship, we went to Mark's Carnival it's amazing! 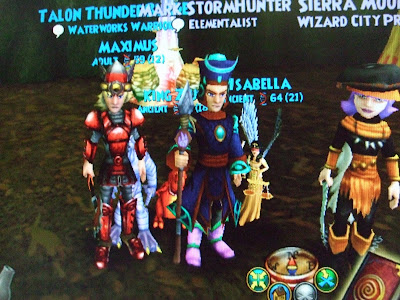 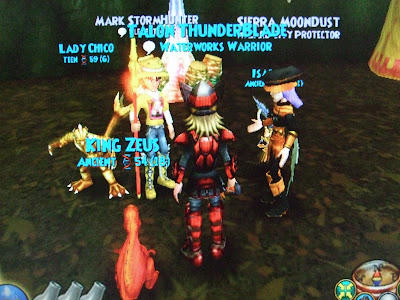 Talon, Mark, and Sierra talking to each other and having a good time.
Also, that is Mark's costume for the Ravenwood Ball. (http://www.diaryofawizard.com/ for more info)
And that is also my costume for the Ravenwood Ball.
Shebly Rose: Flowers danced and sang around Bartleby, but from nowhere the airplane dropped some pants on top of the Pacific Ocean.
﻿See you in the Spiral!-Thunderblade
Inscribed by Talon Thunderblade at 11:53 AM