50th Post! Results of the Nightmare and Cancer Walk Review

Wow, three months and a half later, I have my 50th post. With all the help of my friends, I have accomplished: 4850+ views, 46 followers, and 50 posts! Thanks, guys! I am really flourished and astounded. Because of that... I will release my Secret Project Contest Thingy! That's right, but what is this "Secret Project Contest Thingy" you say? I say it's the... FUN MAZE of the WYVERN OF FIRE WATER!
"That's a weird title."

Which new pegasus mount are you going to buy?

I wasn't expcecting that many votes considering that the pegasus mount is very expensive. But I did give three other options.

Which school do you think is the most populated?

(45 voted)
Now Death sucked out everyone's lives here. It was almost equivalent to fire and storm combined. The school of myth was not voted at all.

So I now there is a new poll: Which storyline all of time do you like best from each world?

I found this in a book in a store. 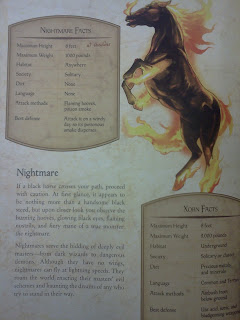 So a Nightmare is actually a real creature. Well, in the mythical world of course. But would've thought that you find that creature in w101 and in a book?

Ok, so the Cancer Walk of 2011 that Evil Theurgist was hosting was yesterday. I had a great time there. I did get to meet and add Jason Goldriver and my own fan, Eric Fireblood. Yes, I have a fan. Jason Goldriver runs the blog Swordroll. He is an aweosme wizard, and it would be grand if you followed his blog. I kept getting lost and behind throughout the event though XD. Edward Lifegem just laughed at the ones who got in a battle while walking with the crowd. 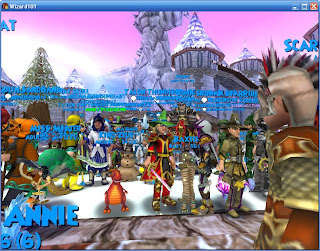 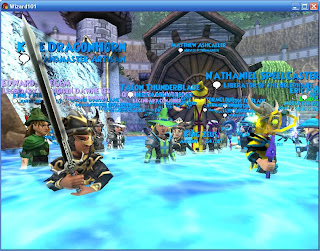 We take a dip in Triton Avenue. 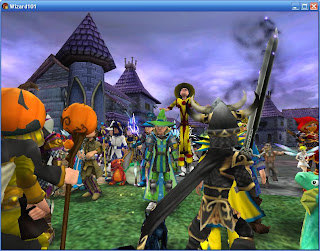 A scene, nothing much. 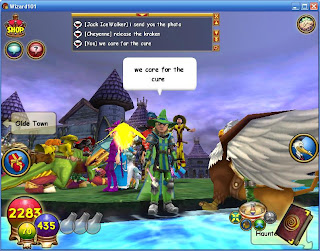 We care for the cure. 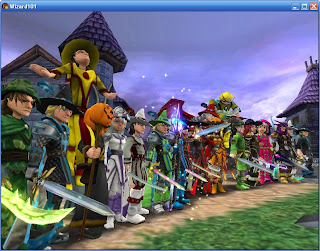 That's a a lot of wizards carrying a lot of swords ready to destory the cause of cancer. We definitly raised the awareness of cancer much more than just a bar yesterday.

Another view of most of the people who attended. 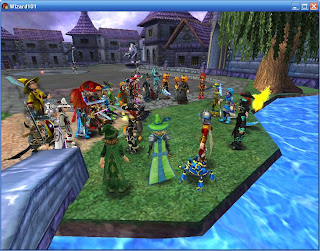 A circle. Well, oval...ellipse.
So apparently, after the cancer walk I went to my "wizard101 file" in documents. I moved it to the desktop so it was easier to access my wizard101 pictures. Turns out that there wasn't a zoom for it. So I moved it back to the documents. Then I lost it :P. With the convulsion of 30 minutes of rumaging through files, I found it. There's nothing to worry about.

FUN MAZE of the WYVERN OF FIRE WATER!

"What the heckhound is that?"

It's my biggest world domi-- No, it's my new maze I am releasing! It will be stretched through 3 houses. Your goal from each house is to find a number of things which is easy to count and find the teleporter linking from one to another. Each house has something you need to count for. There will prizes. I will not tell you just yet. There will be a total of either 5 winners. First 5 people who send the email of the required number of things found from each house wins. More information will be told later this month. If you're confusedm don't worry. This is just to get you all hyped for it.

As for the Wizard Drawings, I am still continuing. I just can't find the time to sit down and draw. Nicholas, if you are reading this. I have not failed you yet! Hang on. For the Expedition, this is still going. I need to find the things and events though. So bare with me.
Wow, you made it through the end of my 50th post. Gratz. I gotta play some wiz now lol. Oh, and also, I have a new page up, All My Headers! These include the first one to the latest one. Check it out!

Shelby Rose: The parasaurolophus played Dynamite, Break Your Heart, and Higher on piano while eating Chex Mix and reciting the periodic table.

See you in the Spiral!-Thunderblade
Inscribed by Talon Thunderblade at 7:45 AM